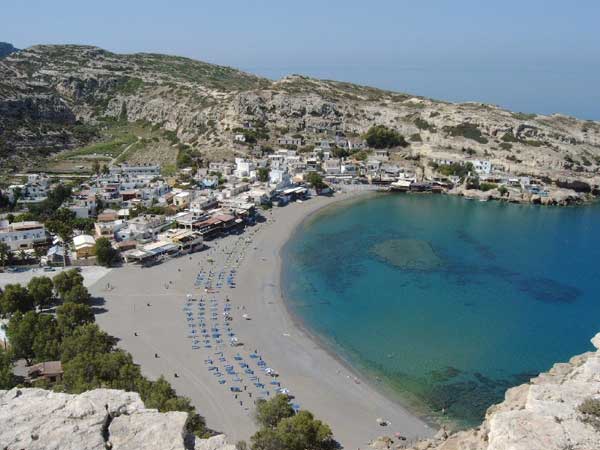 Located on the south east part of Crete, Matala is famed for its beaches in Crete. Matala is located in the prefecture of Heraklion but offers something different away from the big tourist packed resorts on the east coast of Crete. Many tourist but locals also believe that Matala is one of the most famous Cretan destinations that anyone who travels in Crete should visit.

Matala was the ancient port of Phaistos and Gortys and a former fishing community which has developed into a modern holiday Mecca. It is located 4 km south west of the village of Pitsidia and 75 km from Heraklion. It’s famed for its caves and its ancient city under the sea near Matala which will be explained in more detail below.

So, for a relaxing holiday with quiet nightlife choose Matala.

There is 1 main beach in Matala which is always busy but not overcrowded. The beach is the site of the caves of Matala. This is what Matala is known for and rightly famous within Crete for. The caves are actually artificial, carved out in Neolithic times. There is evidence of tombs found inside the caves dating back to Minoan, Roman and early Christian times. 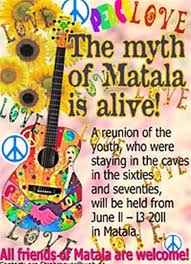 It was once said that Brutas himself stayed in the caves.  More recently the caves were occupied in the late 60´s and 70´s by a hippy commune.

The hippy commune was not totally welcome by the locals and in the end they were moved on and the caves are now protected by the Government. During this time many famous musicians of the time visited the cave from Cat Stevens, Bob Dylan and Joni Mitchell, all who composed songs about the beauty of Matala.

Nowadays you are free to enter the caves during the daytime, but no longer permitted to stay in them overnight. Camping is still permitted in Matala but now only on certain areas and is strictly controlled. More information on the Matala campsite can be found here.

It’s recommended if you want to enter the caves that you were suitable footwear as the limestone is very slippery and quite dangerous. The caves themselves aren’t too deep so no torch is required. Cameras are of course permitted.

Nearby, the archaeological site of Kommos offers Minoan ruins on a small scale, and also further out in the bay you can dive down to the ancient city of Gortys, from roman times where the of Roman capital of Crete has sunk into the sea. It was the Roman capital around 220 B.C. When diving around this area you need to bring your own scuba diving equipment as there are no scuba dive centers around this area, the closest lies in Heraklion City. 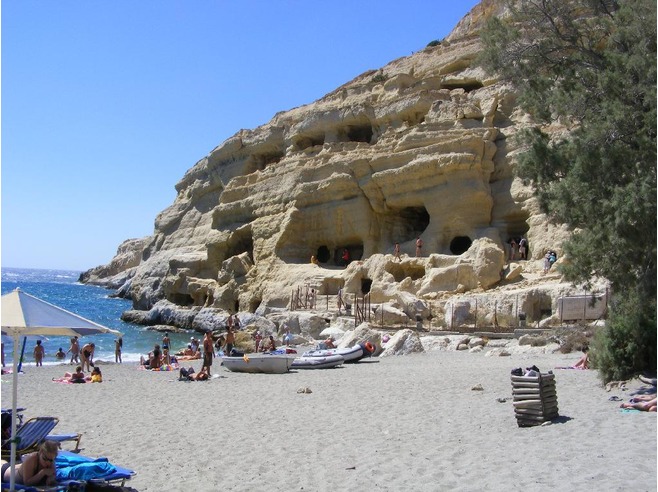 There is a local market in Matala offering all manner of local produce and goods, take your time to wander round this and you can find some great bargains lower than the store prices.

As well as the market you will find most stores offering a wealth of ceramics and potteries as well as other locally produced tourist driven items, but seek out the gallery of Matala for gifts carved out of olive wood, local honeys and some of the smoothest Raki on the island. Raki is available all over Crete but the locals of Matala claim it’s the best on the island.

If you want a free all over body mud pack then you can hike up about 40 minutes from Red beach to find a pleasant Oasis “Clothes optional” where you can use the clay on the cliffs mixed with some seawater and rub it all over your body and lie in the sun until its suitably dry before washing it off. You will come away with softer skin and feeling suitably refreshed.