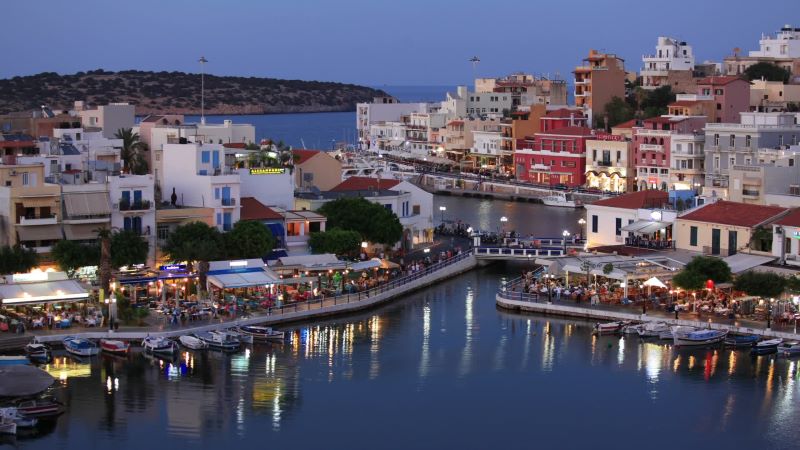 Agios Nikolaos, the capital of the prefecture of Lassithi, is located 65 km east of the city of Heraklion on the northern coast of Crete, in the bay of Mirabello.

The area was inhabited in antiquity and was called Kamara. During the Venetian period it had a castle, also known as Mirabello Castle, but the settlement was deserted during the Ottoman era and began to be inhabited again in the 19th century.

The name of the city came from the Byzantine church located in the bay of Agios Nikolaos.

The current city is built on the site of ancient Latos to Kamara, a port of Latos Etera. The two cities were an administrative unit in the 3rd century BC, worshiped the same deity, Eilithia, patroness of childbirth and had single coins that on one side depicted Eilithia or Artemis and on the other Hermes with the word Lation.

Lato to Kamara, as a port, developed during this period in terms of population and economy, while on the contrary Lato began to decline. Statues, inscriptions and many tombs have been found in the river area since that time and the tombstones are on display at the Archaeological Museum.

In the first Byzantine period it still existed as a city and was called the Diocese of Kamara. 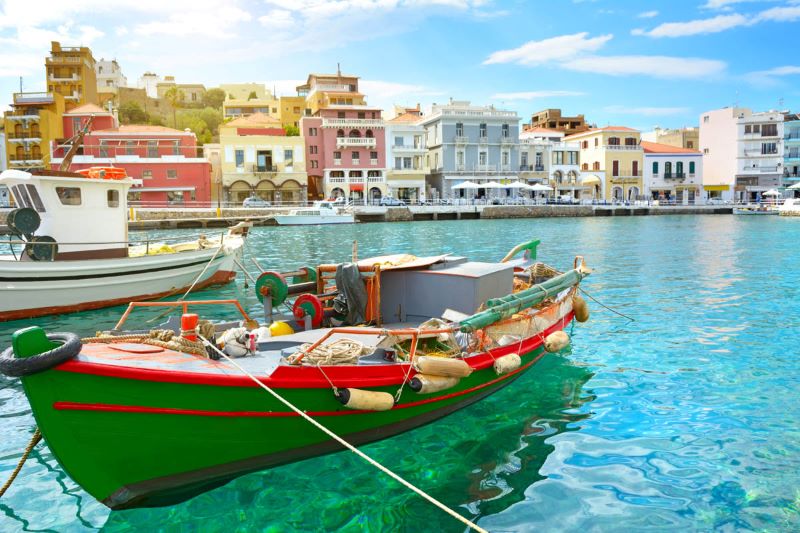 The current city of Agios Nikolaos, is a picturesque and popular resort, which despite being the capital of the prefecture, does not resemble an urban center and is considered the most developed tourist city of Crete, having to offer its visitors many attractions, but also very organized tourist infrastructure, inspired by Cretan hospitality.

A walk in the shops of the city is always pleasant, as the shops are decorated with dialectal items of traditional Cretan art, copies of archeological museums, jewelry and original embroidery.

They also have local products and fresh Cretan flavors that fascinate every palate. Traditional cafes with plenty of raki and local delicacies win the visitor.

The magic of Agios Nikolaos continues into the night. Youth hangouts, bars with a relaxed atmosphere and loud music, come to satisfy all tastes. Agios Nikolaos, a city full of alternative, enchanting landscapes and open-hearted people! 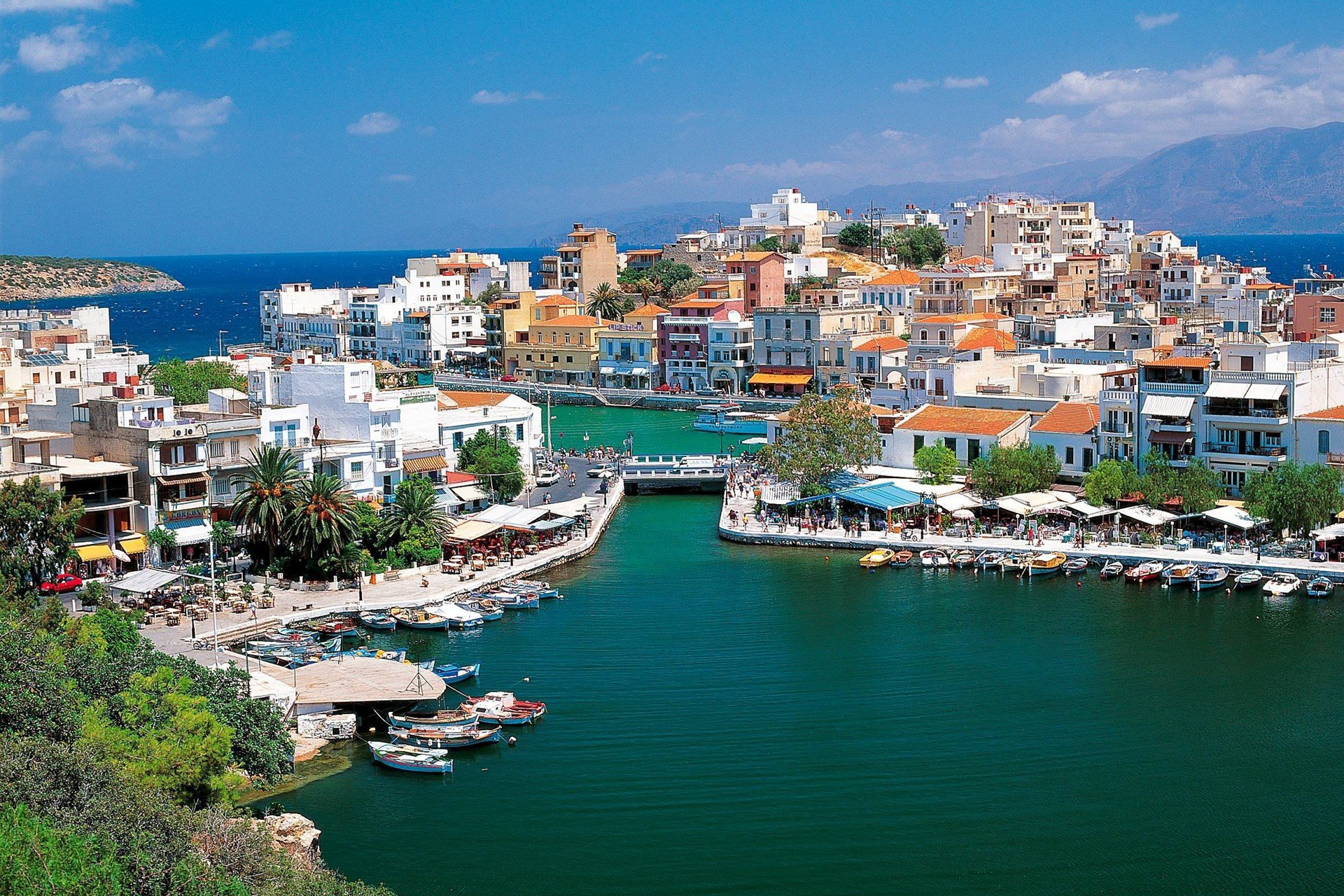 Lake Voulismeni is a small lagoon in the center of the city, connected to the port of the city by a canal that opened in 1870. Many ancient myths mention the Lake, the oldest of which want the goddesses Athena and Artemis to bathe in it. 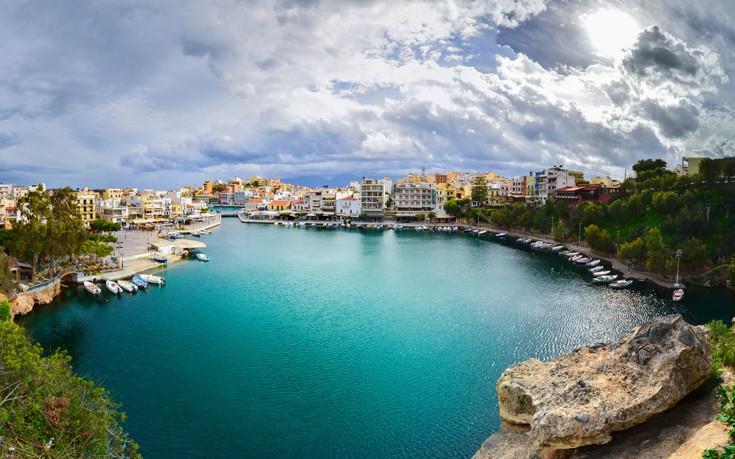 Two urban myths are associated with the Lake, that there is no bottom, and that the Lake is connected to the volcano of Santorini. The latest myth is based on the fact that during the last eruption of the volcano, the waters of the Lake swelled and flooded the warehouses around it, as well as the fact that dead fish appeared on its surface.

At the bottom of the lake there is ammunition that was abandoned by German soldiers before leaving at the end of World War II.

Today, the circular lake of Agios Nikolaos, with a diameter of 137m., is the trademark of the city around which are gathered many cafes and restaurants. The lake with its still waters, ducks, fishing boats and green slopes that surround it is a place that offers tranquility and beautiful views.

The most beautiful and most special view to the lake, is from a small park located just above the lake, on its south side. 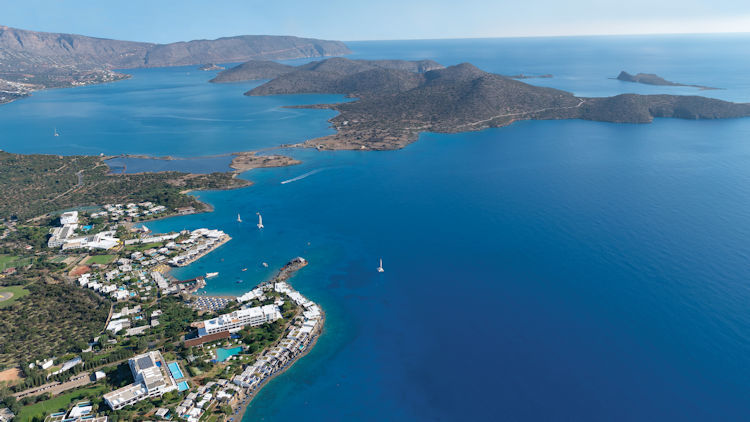 Elounda is a small seaside town on the north coast of Crete, about 10 km from the town of Agios Nikolaos. It is known, as one of the most popular tourist destinations, since quite often hosts VIP guests, both from Greece and the rest of the world.

The first settlement in the area was the organized city-state of Olus, whose inhabitants were in conflict with the inhabitants of the Doric Latos. Most of Olounda has been submerged in the sea since the end of antiquity and the ruins are visible during diving.

The ancient Olos dates around 3500 to 4000 years BC. which during the Minoan Age had great prosperity. Ruins of this ancient city are visible in "Kanali" area, as most of the city collapsed after a strong earthquake that struck Mirabello Bay and the surrounding area. 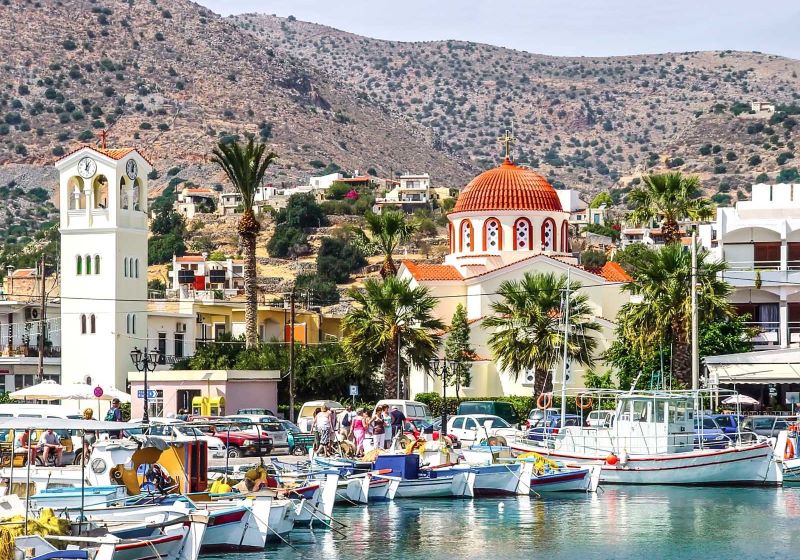 Today, many hotel units, villas and apartments have been built to accommodate the innumerable number of visitors who arrive in the area for holidays every summer.

There are also restaurants, cafes and small bars where guests enjoy traditional food and cool cocktails, as well as shops where tourists will find souvenirs, traditional Cretan products and much more...

It also has many beaches, some of which have been awarded the "Blue Flag".

In the area of ​​Elounda, there is also one of the most historic monuments of Greece, the island of Spinalonga, which is located directly opposite the picturesque fishing village of Plaka.

The island of Spinalonga was one of the strongholds of Crete and one of the last centers of resistance during the Venetian-Turkish War of 1645-1669, as well as a refuge for the inhabitants of the surrounding areas. Spinalonga receives daily about 5 to 7 thousand visitors who are transported to the island by boat. 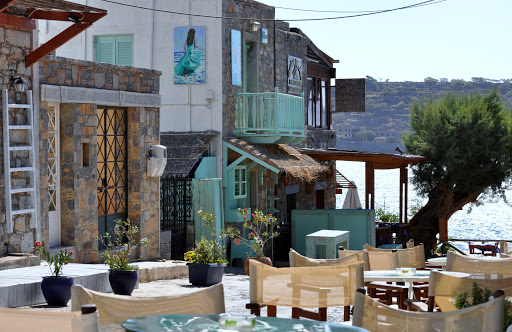 Plaka is a small seaside village just after Elounda, characterized as a traditional settlement. The area, is strongly connected to Spinalonga island, as all first need supplies and the leprosy patients, were transported by boat from Plaka to Spinalonga. Thus the place was developed as a settlement, to serve mainly the needs of the living "dead" of the island.

After the closure of the leprosarium, Plaka was transformed into a tourist destination, with the creation of accommodation, restaurants and tourist shops.

Coming to Plaka, it is worth exploring the surrounding area with the traditional villages, the archeological sites and the endless olive groves of Mirabello.

Continuing north of the village, you can pass by the village of Vrouchas to see the old windmills and continuing east, you will reach the lighthouse of Akrotiri Aforesmenos, which is located at the northwestern point of Mirabello Bay.