Elafonissi, is a small islet located near the southwestern tip of Crete, about 200 meters from the coast and its surrounded by a shallow lagoon.

The sand in Elafonissi is white, but in many places it has a pink tinge from the thousands of broken shells it contains. The waters are transparent and with their blue-green color they will remind you of an exotic paradise.

It has joined the network with Natura protected areas, as it is an ecosystem of exceptional ecological importance which unfortunately due to the huge number of visitors has deteriorated considerably.

Several endemic species of flora grow in the sand dunes of Elafonissi, while the white sand lilies that bloom in autumn and the endangered sea cedars make an impression. This is where the loggerhead turtles and several sand dune animals nest. 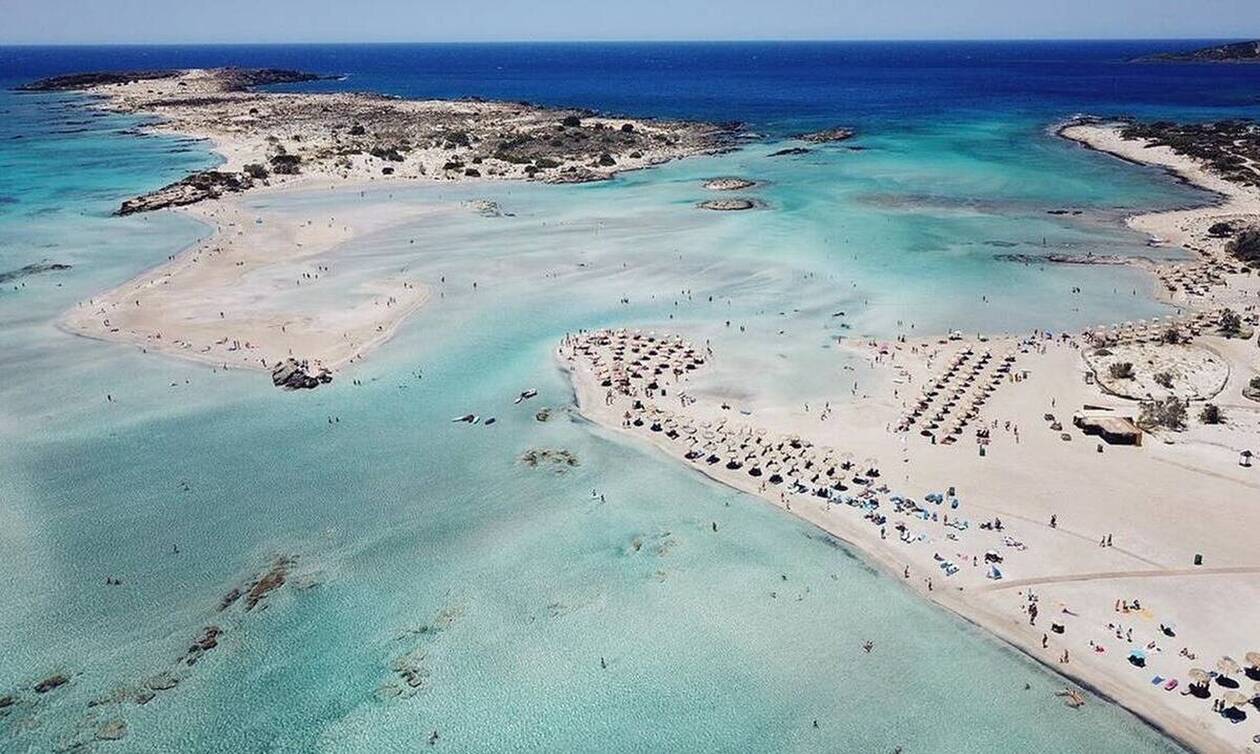 It is strictly forbidden to cut plants or even take sand with you.

On both sides of the peninsula, are formed several beautiful beaches with white sand and turquoise waters, reminiscent of an exotic landscape from an exotic part of the Caribbean. The sand in many places gets pink colors from the thousands of broken shells. At the point where the peninsula breaks, the water does not exceed half a meter and a small lagoon with warm waters is created, ideal for children. You can cross with a little care, even having your things with you. 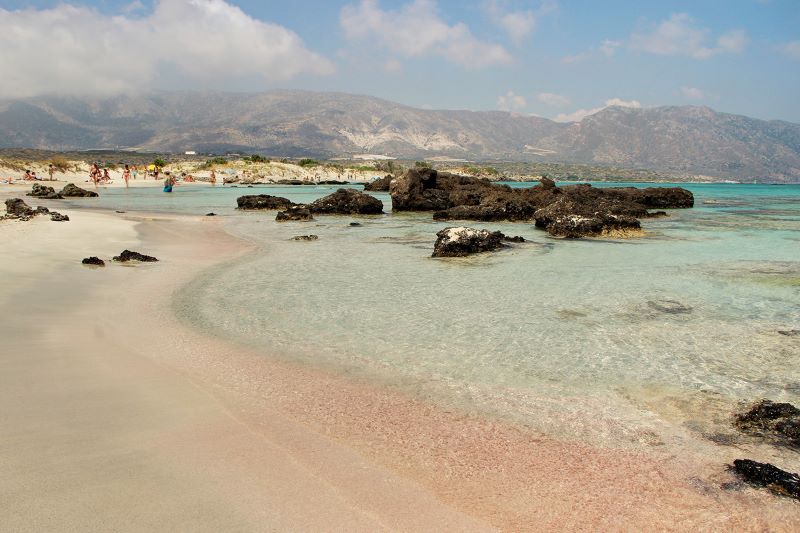 The east side of the beach, in front of the lagoon, is organized and gathers most people. There are umbrellas, showers, lifeguards, refreshments and changing rooms. Also, behind the organized beach there is a huge area for parking and even further some rooms for rent. On the contrary, the beaches on both sides of the island are less crowded and are more beautiful. 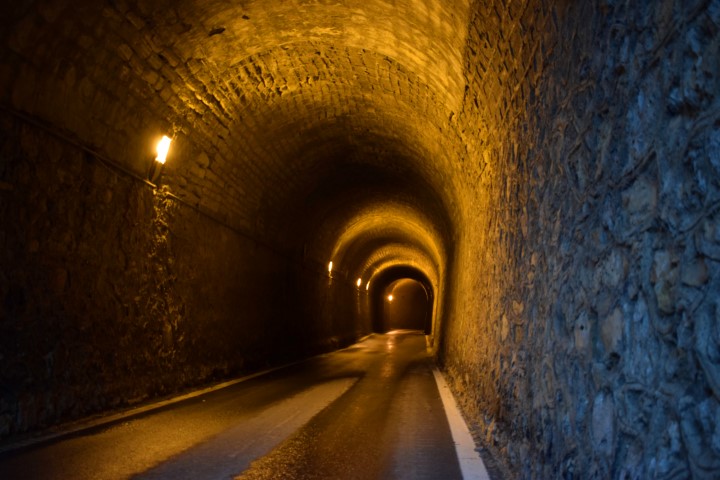 As Elafonissi is one of the most famous beaches of Crete, it receives thousands of visitors every summer, which in July and August reach 2500 visitors daily, if you want to enjoy it more it is better either to come at the beginning or end of summer or to avoid from 11 a.m. to 4 p.m., especially on weekends.However, if you want to be completely isolated or even nudist, you can walk along the peninsula until you find a trick you like.

While driving in the narrow and curvy mountain road towards Elafonisi, you will pass through a very small tunel, called Topolia. The road includes some steep sections, without central lines to be marked, is very narrow, barely wide enough for 2 cars at the same time and it doesn't have any protections or railings. The surface of the road is asphalt, however you have to be very careful.

Tradition states that the sanctity of the place begins with finding the image of the Assumption of the Virgin in the niche of a rock. It is believed that this image was probably hidden here during the iconoclasm of 726-842 AD. It is even said that it was found by a farmer who saw a candle flame at night as a vision. Before Chrysoskalitissa was built, in its place there was another church in the name of the Assumption of the Virgin. He was clinging to a cavernous rock. On the roof of the rock there was also the church of the Holy Trinity. 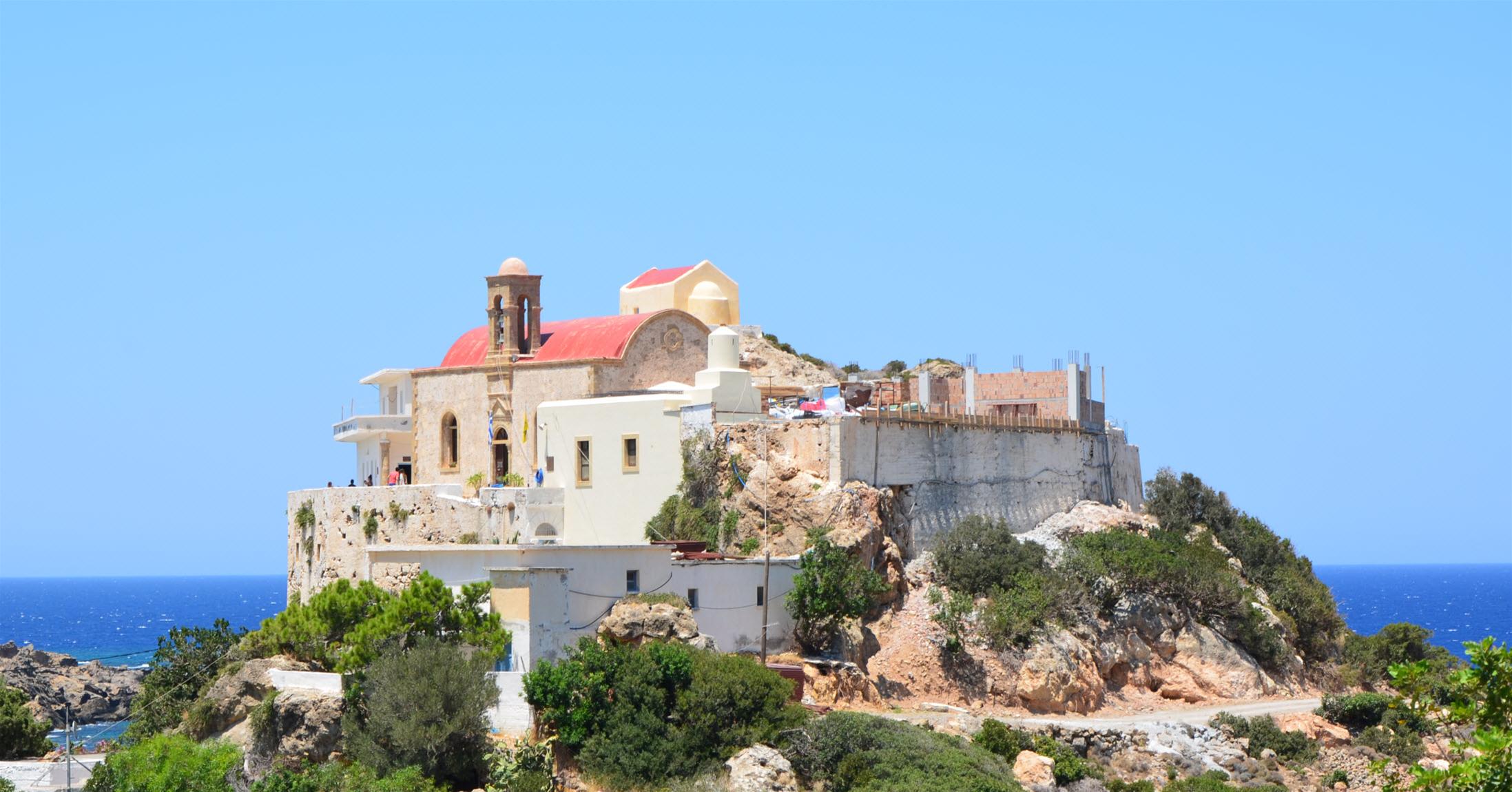 When they decided to build a bigger church, they thought of building it at the foot of the rock, because that way, they would avoid the difficulties and the hassle of raising the materials. It is said that while the image had been transferred elsewhere, it was mysteriously returning to its original location. Everyone considered the event as a wish of the Virgin Mary, to build the temple on the rock, which happened.

On Easter day in 1824, the great massacre took place in Lafonisi by the Turkish-Egyptians. In their passage, ten churches in the area were destroyed. They also passed by Chrysoskalitissa which was deserted. They wanted to level it, but they were stopped by a swarm of bees, which had as a hive the niche where the iconostasis we meet is located, when we walk up to the Monastery.

The first to live after the desolation was a monk from Kythira. After his death, the monastery was deserted again. In 1855 the revival of the Monastery began with the installation of the monk Manassi Karagiannakis. He came from the Glyniades family of the village of Askifos Sfakion. He began the renovation of the ruined Monastery and built new buildings from the ruins.

After a few years, Emmanuel Kalitsounakis came to the Monastery, coming from the village of Tzitzifia. He was ordained a monk and took the name Meletios. Manassis brought the silver icon of the Virgin Mary from Smyrna. In 1866 Manassis died, leaving a small fortune he had bought with subscriptions and money.

Meletios continued the work of Manassis with dignity. During Manassi they destroyed the old church and cut the rock for the construction of the church we see today. The building began willingly and diligently on May 9, 1894 and was completed on August 10 of the same year.

The inauguration took place on the day of the feast of the Assumption of the Virgin Mary on August 15. In 1897 Manassis went abroad and was succeeded by Grigorios Plokamakis (from Plokamiana) who served the Monastery for more than half a century, which Kazantzakis mentions in his work "Reference to Greco".

In 1900 the Monastery was dissolved together with other monasteries of Crete. It was re-established as a women's club in 1940. After the occupation of Crete by the Germans, the monastery housed several soldiers, fighters and others who belonged to the English spy.

In 1943 the German conquerors settled in the Monastery (after expelling the monks). They were then shot by an English plane. Signs of gunfire can be seen in the low image of the iconostasis. Life returned after January 27, 1944, the day the Germans left. This life continues uninterrupted to this day, by the hospitable and active monks, who offer their services and keep the monastery alive. 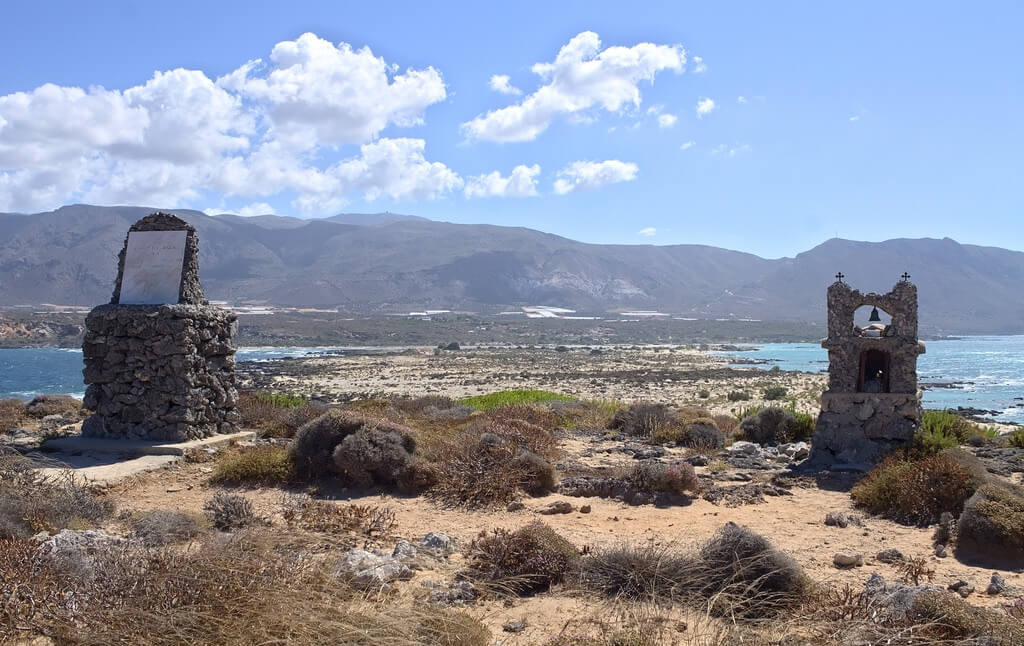 On Easter of 1824, hundreds of civilians were massacred by the Turks in Elafonissi. About 600 civilians from the surrounding villages fled to Elafonissi. 40 warriors were with them.

All of them were waiting for the ship that would take them to the then British-occupied Ionian Islands. The Turks reached the land, opposite Elafonisi.

But they could not find a way to cross the island. Then one of their horses entered the sea and as the waters were very shallow he reached Elafonisi. According to another version, a donkey looking for its boss led the Turks to Elafonissi. There is a third version according to which the Turks knew that they could cross Elafonisi through the sea, as they had been informed by a Turkish Cretan shepherd named Kamberis.

Despite the brave resistance of the fighters, the Turks prevailed and only a few of those on the island managed to escape. Several women and children were sold in the slave markets of Egypt, all the rest were slaughtered. This happened on Sunday Easter April 17th 1824.

In memory of all those who lost their lives in Elafonisi on Easter of 1824, a stone monument has been erected, where a marble plaque reads: ''In memory of the battle of Lafonisi 1824. Heroic death of 40 warriors, sacrifice of 600 women and children from your blood of redemption, the dawn turns brown''.

On 9/2/1907 (with the Julian Calendar) the Austrian steamer Imperatrix sank in Elafonisi. It was built in 1888 and operated the Trieste-Calcutta route.

Its crew consisted of 144 men, while it carried 38 passengers among them a Greek named Augustine. Bad weather combined with human error led to the shipwreck.

Fifty people aboard the ship fell into the sea. Of these, 12 were saved and 38 drowned, but the bodies of only 17 of them were found and buried in Elafonissi. The rest went to the bow for safety, as the ship was stuck in the rocks.

Eventually they were saved thanks to the efforts of the inhabitants of the surrounding villages, the abbot and the monks of the Chrysoskalitissa Monastery neighboring Elafonissi and the assistance of three Russian ships that rushed to Elafonissi from Chania.

Among them was the "Hividis" cruiser of the Russian navy. Its commander was Captain Nikolaos Nikolayevich Philosopher, who served in the Megalonisos as head of the naval force that Russia had placed at the disposal of High Commissioner Zaimis.

For the salvation of dozens of shipwrecks, the Philosopher was awarded by the Greek government, while Tsar Nicholas awarded him the rank of Admiral.