Coming to Heraklion for first time, the visitor nowadays may be surprised by the changes that are taking place in Crete´s capital city. Heraklion is celebrating its rich history and moving onwards to a future full of potential.

Where, at one time, the number of cars in the city center would have made walking difficult, you will now find large city-center spaces cleared of traffic. You can enjoy walking in one of the most historically and socially fascinating cities facing the Mediterranean, on streets free from traffic noise and rush. The city has opened up in so many ways, making the city a place of discovery. These changes bring a harmony too; between the traditionally warm, considerate people of Heraklion, and the fine buildings that surround us, the open public spaces and views over the ocean. Many landmarks tell their story about the city and the island that gave birth to gods, to rebellion, and to a place that inspires everyone who feels the spirit of Crete.

Heraklion today is living between the fast moving currents of regeneration and a deep desire to maintain links with a past. Both these strands define its character. In the last hundred years alone, we have seen huge changes, which can be quite easily followed, in buildings and streets that reflect the changing fortunes of Crete. The old town areas of the city, established from mediaeval times, now offer visitors some fantastic walks in the heart of the city.

If you begin a walk around Heraklion, starting at the fishing harbour close to the modern port, what will strike you first is the Venetian fortress at the harbour gate. The fortress was originally built by the Venetians and called Rocca al Mare, but is now known by its Turkish name, Koules. It has a mixed history for centuries it was used as protection against invaders, as were the great city walls and ditches. These are among the longest city walls in Europe. 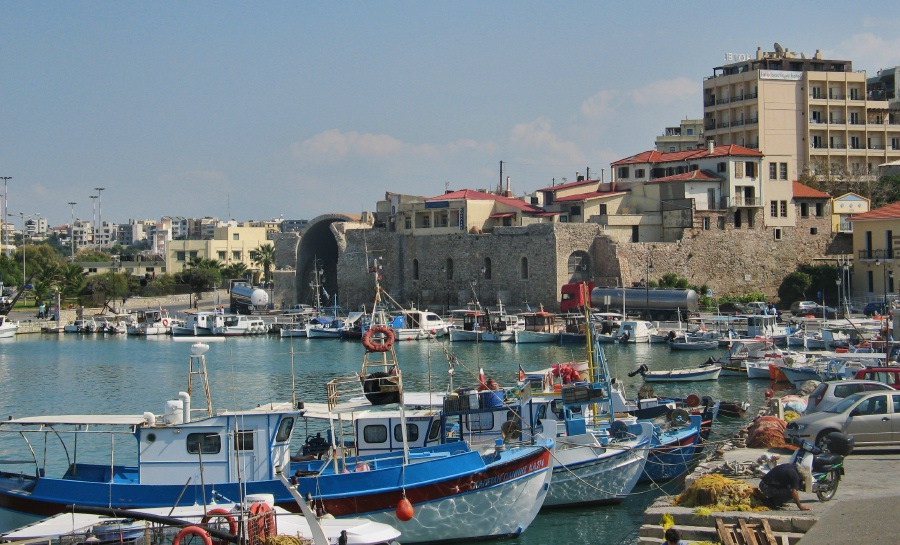 With its huge dark hallways and cells, the fortress was also a prison to many Cretan rebels and those who broke the rules imposed by successive occupiers of Crete. Koules is built on two tiers and offers a commanding view of Heraklion from the battlements. Nowadays, the harbour itself is home to brightly colored fishing boats and busy tavernas selling fresh fish.

Looking back towards the city you will see the strong arches which housed boats under repair and were used as an arsenal for storing guns and gunpowder. The greatest threat to the Venetian stronghold of Heraklion, or Candia, as it was named, was thought to come from the seaward side of the city, and indeed, many naval skirmishes were fought off this coast. The view northward takes in the uninhabited island of Dia, where evidence of ancient Minoan settlement (approx. 2700-1450 BC) was found by the diver, Jacques Cousteau. Boat trips can be booked from travel shops throughout central Heraklion, as can excursions to various places of interest.

The car free 25 August St. is directly opposite the Old Harbour and extends to Lion Square. It takes its name from a massacre of martyrs which occurred in 1898. This involved the killing of many Cretans and, crucially, British in this area, by the Turks, finally forcing the Great Powers (Britain, France and Russia) to recognize Crete´s struggle. These events led eventually to the declaration of a Cretan State and, finally, unification with Greece in 1913. Old and modern buildings compete for space now on the street named to remember 25th August. 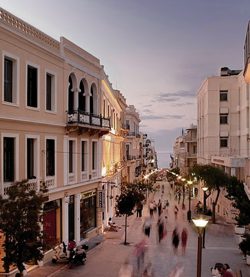 Walking up the short hill, and passing the shops and tourist offices, we reach St. Titus´ Cathedral, an impressive sight. Saint Titus, a fellow traveler of Saint Paul, preached the gospel in Crete during Roman rule and was martyred in Gortyn, where a 7th Century basilica stands in his memory. His church in Heraklion was built during the second Byzantine period, when it first served as the city´s cathedral. During Venetian rule, it housed the seat of the Catholic archbishop and was renovated in 1466, only to be ruined in a fire in 1544. During the Turkish Occupation it served as a mosque and called Vizier Tzami, when a minaret was added, now gone.

The present-day structure is the result of further renovations after its almost entire destruction by a strong earthquake in 1856, and later work which followed in 1922. The skull of St Titus was transferred here from Venice in 1956 and has since been kept in the church. If the cathedral is open when you visit, it is well worth going in.

A little further and you discover the Venetian architecture of the Loggia which functioned as a club for the nobility to gather and relax. The Loggia is a wonderful example of Venetian building, unmistakable with its semi-circular arches, it was built in the 16th century and was located in the Piazza dei Signori (Square of the Administrative Authorities). Today, the Loggia, decorated with sculptured coat of arms, trophies and metopes, houses part of the town-hall of Heraklion. The Loggia was awarded the Europa Nostra first prize in 1987 for the best renovated and preserved European monument of the year.

St. Mark´s Basilica, almost next door, is now the Municipal Art Gallery and often host to art and crafts exhibitions, almost always open to visit. Built in 1239 in the Piazza delle Biade (Square of Blades), it was at one time the Cathedral of Crete. The Basilica belonged to the reigning Duke, eventually becoming his burial place.

The Lion Square or Liondaria

This is the heart of Heraklion where tourists and locals share the small space around the fountain, exchanging glances and perhaps a few words. Business and pleasure combine here, and it is the place to meet for whatever purpose or no purpose. To give some background, it might also be called the Morosini Fountain or, Liondaria in Greek or, more properly, Plateia Eleftheriou Venizelou, after Venizelos, Crete´s greatest man of state. The decorated fountain is composed of eight cisterns and decorated with stone relief, depicting figures of Greek mythology, Nymphs, Tritons, sea monsters and dolphins, while the main basin is supported by four sitting lions balancing a circular bowl on their heads. It was left by Francesco Morosini, the Italian governor who had it built to commemorate Venetian success in bringing much needed water, through a brilliantly executed viaduct system from Mount Youchtas, to the centre of the city. Morosini was still in charge when the Turks captured the city. Nowadays it is always interesting, the hub around which Heraklion revolves. 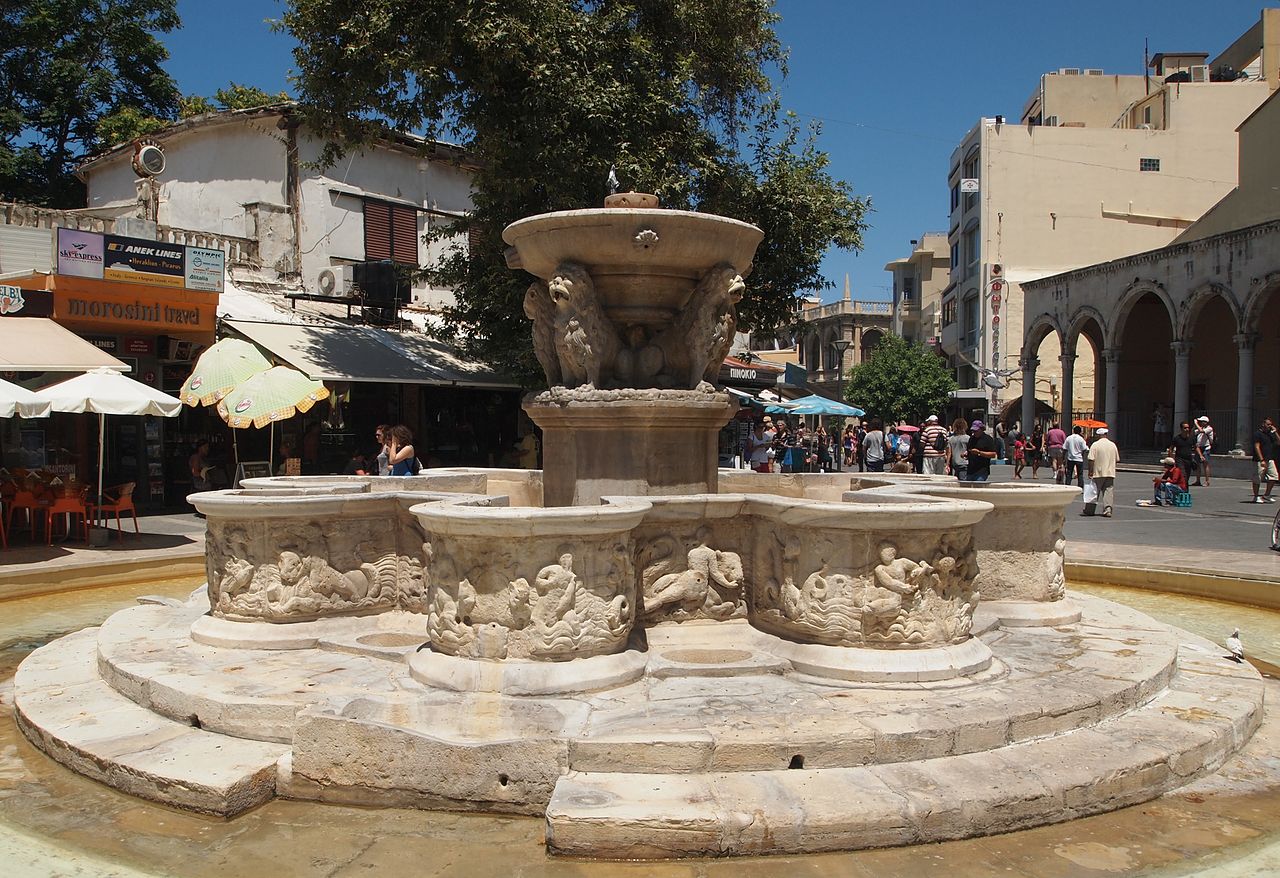 No need to be hungry here. The bougatsas, or vanilla cream pies, are great for breakfast, and there are plenty of omelettes, crepe and souvlaki places around. You will always be given water when you sit to order something, and might well be charmed into sitting for quite a while in any of these worthwhile establishments. On the far side of the square, you might prefer the renewed Handakos Street, now closed to traffic. Handakos, a busy thoroughfare since antiquity, is an attractive place to walk, shop or rest.

Walk slowly through the Agora, the Market Street that runs alongside a shopping boulevard called 1866, after a Cretan uprising.

From top to bottom, with some shaded sideways exits, this old Market Street is still a place for Herakliotes´ to come every day to find socks, shirts, herbs, fish and fresh meat. It´s a good place to find thyme honey, raki (the Cretan clear spirit) from among shops selling everything from selections of Cretan music to the finest cheese. This market has a long history, always a place to meet and make plans. Walk the side-streets and you will smell good Cretan food and feel the buzz around you.

Cafés here do not distinguish much between Greeks and foreigners, neither do the inexpensive eating houses that serve good food to all who enter. There are some tourist traps, but all are friendly and offer good quality. At the top end, at the last turn, find the fish market and some great little fish ouzeries (smaller and less formal than a taverna) that fill up at night and provide excellent, simple, seafood.

Plateia Kornarou lays at the top of the market, with a lovely Venetian fountain of its own, the Bembo Fountain, probably the oldest, and it bears some very good decoration, although it has ceased to fount. The Bembo Fountain was built in 1588 by Venetian architect Zuanne Bembo. It is decorated with columns, Venetian family coats-of-arms and a headless male statue, brought here from Ierapetra. At one time, people believed that the statue had supernatural powers and, every May, religious rituals were organized in its honor. The atmospheric kafeneio alongside it, still serving Greek coffee and aperitifs from an antique stone pavillion at its center, is a great reminder of Crete´s Turkish past. The Plateia itself is named after Vitsenzos Kornaros (1553 to approx.1614), composer of the epic poem Erotokritos, which is regularly performed around Crete, and still evokes pride in every Cretan heart. From here, it is close to Agios Minas Cathedral or, in the opposite direction, Freedom Square.

You will find plenty of life around the wide space in front of the cathedral, dedicated to the Patron Saint of Heraklion and one of Greece´s largest churches, completed in a cruciform shape with twin towers. The church suffered damage in the battles for the city and needed thirty years to be rebuilt. In 1896 it was inaugurated with lavish celebrations.

The plateia also contains a wonderful collection of religious icon paintings, housed inside the strong walls of the much older church of Agios Minas, and the Basilica of Agia Ekaterini, (Saint Katherine) built in 1555 and the site of a renowned school of Renaissance painters and writers in the 16th and 17th Centuries. Inside the church can be seen the work of Mikail Damaskinos among other representatives of the Cretan School. The plateia (square) here takes its name from this church, rather than the great cathedral.

The spacious Plateia Eleftherias is worth exploring, built in a crescent shape alongside the Archaeological Museum and close to Heraklion´s municipal buildings and the main foreign Consulates. Apart from breathing space, it offers the shaded park of Georgiades, a fine place to rest the feet and watch the busiest intersection in Heraklion. On the seaward side of the square is the entrance to St. George´s Gate, used from Venetian times as a passage between the city and its port, the entrance is down stone steps, leading to an atmospheric dome-roofed chamber and the lower exit. The passage may still be accessed and is often the venue for art exhibitions. It is all that remains now of an important mediaeval entrance to the city. There are plenty of eating and drinking houses that occupy the north side of the square.