Agios Nikolaos was settled in the late Bronze Age by Dorian occupants of Lato, at a time when the security of the Lato hillfort became a lesser concern and easy access to the harbour at Agios Nikolaos became more important.

The name Agios Nikolaos means Saint Nicholas. Its stress lies on the second syllable of the word "Nikolaos". Agios Nikolaos or Ayios Nikolaos (alternative romanizations of the Greek Άγιος Νικόλαος) is a common placename in Greece and Cyprus, since Saint Nicholas is the patron saint of sailors and of all of Greece.

Agios Nikolaos is a coastal town on the Greek island of Crete, lying east of the island's capital Heraklion, north of the town of Ierapetra and west of the town of Sitia and is probably best known as a tourist town that serves as a hub to the twenty or so small villages and farms that make up that part of Lassithi. Tourist attractions include the small lagoon Lake Voulismeni, small beaches in the town, the tiny island Agioi Pantes, the archaeological museum, the local flora exhibition “Iris” and numerous fairs.

Just a short ferry ride away from Agios Nikolaos is the island of Spinalonga, an old Venetian fortress turned leper colony in the beginning of the 20th century. 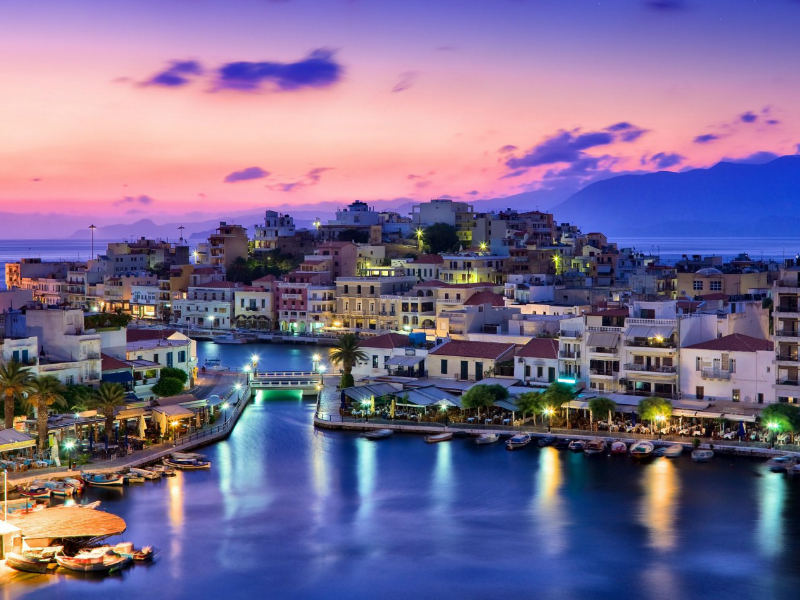 Tourism is mainly West European with Greek tourism concentrated in mid August, though there are a considerable amount of Russian vacationers in East Crete. The lagoon features a small park with a trail, traditional fishing boats, ducks, pigeons, an amphitheatre and many cafès. The modern city of Agios Nikolaos became internationally well known during the 60's, when it was "discovered" by famous cinema directors (Jules Dassin, Walt Disney etc.), BBC producers and many others. It was then that the rapid tourist development of the area started. Among the various productions filmed were He Who Must Die, The Moon-Spinners, and the TV series The Lotus Eaters.

The earliest recorded settlement at Elounda was the ancient Greek city of Olous, whose people were in intermittent conflict with the citizens of Dorian Lato, until a peace treaty was eventually reached. Elounda has a later history as part of the Venetian era. Elounda has changed considerably during its lifespan. The bulk of the ancient city of Olous was reclaimed by the sea towards the end of the Ancient Greek period and is still visible, in part, when diving in the bay of Elounda.

During the early 1900s, Elounda acted as a stopping off point for lepers being transported to the leper colony at Spinalonga. In 1984, the President of France, François Mitterrand, and Colonel Muammar Gaddafi of Libya met in a luxurious Elounda resort to discuss conflict resolution in Chad.

The road into Elounda from Agios Nikolaos is approximately 12 km in length and follows the shore as it climbs to the top of a small mountain. On a clear day it is possible to see the whole of Mirabello Bay and all the way to the eastern tip of Crete.

The small fishing village of Plaka (Lasithi), which overlooks the island of Spinalonga and the Kolikithia Peninsula, is located a mere 5 km from the main square of Elounda heading north away from Agios Nikolaos.

It is also the closest major town to the former leper colony of Spinalonga, located on an island officially named Kalydon.

Elounda is a famous tourist attraction, heavily visited by VIPs for its seaside luxury resorts.